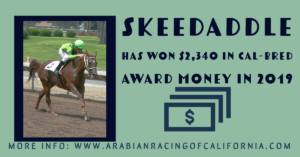 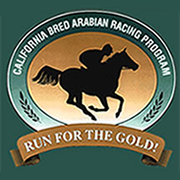 Rules and Information California state law, to promote horse racing, as well as agricultural business within the state, provides the Cal-Bred Incentive Premium Awards Program. The purpose of the program is to add an incentive to breed and race Arabian horses in California. Each time a registered Cal-Bred runs ﬁrst or second in a race within the state, the horse earns cash awards for its owner, its breeder, and its sire’s owner. The Arabian Racing Association of California (ARAC) is the ofﬁcial administrator of the Cal-Bred Awards program. The cash awards are generated by the money wagered on the Arabian races run in the state and are distributed on a yearly basis.

BREEDERS AWARDS: The person(s) listed as breeder of record by the Arabian Horse Association shall receive a sum based upon the prorated share of ﬁrst and second place earnings from 40% of the Award Fund.

OWNERS AWARD: The CHRB licensed person(s) (owner or lessee) listed in the ofﬁcial racing program at the time of the race shall receive a sum based upon the prorated share of ﬁrst and second place earnings from 25% of the award’s fund.

SIRE AWARD: For a stallion to be eligible for Sire Awards, stallion must be ofﬁcially registered as a Cal-Bred Sire, and must have been standing in the state of California when conception of foal occurred, and the stallion was continuously present and re-registered in California for the calendar year in which the qualifying race was conducted. If a sire dies in California and stood his last season at stud in this state he shall, if registered for the years his Cal-Bred foals are racing, continue to be considered an eligible Arabian sire. The stallion owner, as recorded with the Arabian Horse Association shall, after February 15 of the year following the qualifying race(s), receive a sum based on the prorated share from 25% of the Award’s fund for all get which placed ﬁrst and second in one or more races run in California. If no Cal-Bred competitor qualifying for awards has been sired by a stallion who qualifies as a Cal-Bred Sire, no Sire Award will be issued for that year and the 25% award will be divided equally back to the competing horse’s owner and breeder.

NOTE:
For a horse to be considered Cal-Bred, the registration process must be completed at least 48 hours before time of entry in a race. Allow time for processing.

The applicant is to notify the Administrator of any changes in the application information.

The Cal-Bred program may be changed at any time by State Legislation, or by the ARAC Board of Directors.

AWARD FUND: Ten percent (10%) of the Award Fund shall be used to promote the Cal-Bred Program and Arabian racing in California. Any amount not used shall be returned to the fund.

Ask How to Join Our Sponsors